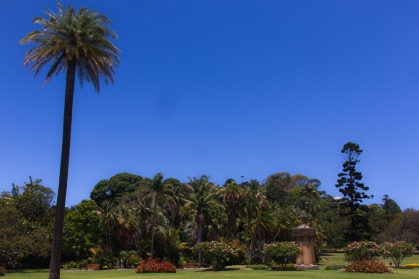 Sydney, Australia was the embarkation point for my cruise of Australia and New Zealand.

It’s hard to imagine anyone running out of things to see and do in Sydney.  Its urban area consists of over 70 harbors and beaches spreading from the City Centre.  The cruise ship was docked at Circular Quay in an area called the Rocks.  Many of the buildings in the Rocks date back to its settlement in the late 18th and early 19th centuries.  Circular Quay is bordered on one side by the Opera House and on the other by the Harbour Bridge.  Both are among the most familiar and most photographed sites in the world.  You can even climb the Harbour Bridge.  Since we overnighted on the ship in the harbor, I was able to get some interesting photos of the city and its two iconic structures at night.

Just the other side of the Opera House is the entrance to the Royal Botanic Gardens.  There, along the harbor amidst the 75 acres of beautiful trees, I found the Noisy Miner bird with its unique yellow eye-patch and the Ibis, wandering the grounds like our pigeons.

A 20-minute ferry ride across the harbor takes you to the Taronga Zoo.  What visit to Australia would be complete without seeing its famous animals, such as, kangaroos, wallabies, and koalas.  In addition, the zoo, built down the side of mountain, provides spectacular views of the City Centre.

Again within walking distance of the ship was Darling Harbor, an entertainment complex, which, during my visit, was also the home of a very large rubber duck!

I accomplished a lot in two and a half days but I’d love to be able to visit Sydney again with time to visit the Blue Mountains and Manly and Bondi Beaches.

The photographer Sue Gajda provided the details and images for the Sydney destination.

Please submit any questions you would like to ask the Photographer: