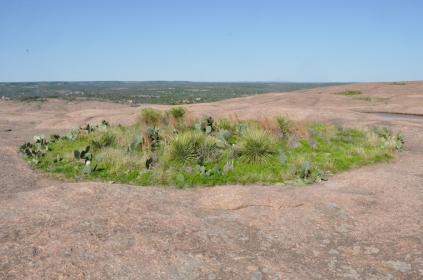 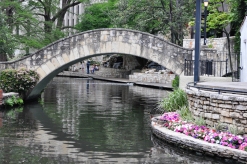 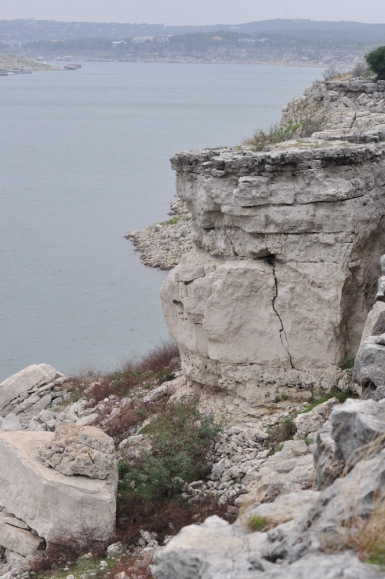 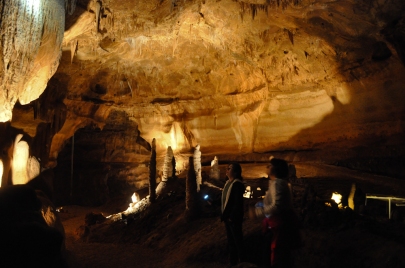 Texas Hill Country is an area of central Texas stretching west from Austin and San Antonio.  The landscape consists of rugged hills formed by a thin layer of soil over limestone or granite.  As a result flash floods are more prevalent in the Texas Hill Country than anywhere else in the United States.  So every park we visited had prominent signs warning you to quickly get away from any creek or river at the first sign of rising water.   Culturally there is a strong influence of German immigrants in the area, in addition to the Spanish and cowboy aspects more commonly associated with Texas.   The Hill Country is also home to the Alamo, the LBJ Ranch, and Luckenbach of country music fame.  We were there the first week of April so we got an early taste of spring compared to Chicago.  The blue bonnets and cacti were in bloom.    And we lucked out on the weather since the Texas/Oklahoma area experienced several days of severe weather both the week before and the week after we were there.  Below are some noteworthy locations from the trip.

San Antonio River Walk:  The city of San Antonio has developed a wonderful river walk along the stretch of the San Antonio River running through the center of town.  The river walk is primarily shops and restaurants but a fair number of birds make their home there as well.  Ducks swim in the river and, along with the pigeons, forage for food scraps at the riverside dining areas.  I captured a number of images of a yellow crested night heron that was gathering materials to build a nest in one of the trees along the river walk.  A number of other towns had parks along the rivers running through the Hill Country.  So we saw a lot of waterfowl.  One of the geese took exception to me taking its photograph.   The goose also charged a pair of coupling ducks and spoiled their fun.

Pace Bend Park:  This is a Travis County park with nine miles of shoreline along Lake Travis.  Lake Travis is a 65 mile long reservoir formed by damming the Colorado River just west of Austin.  The entrance to Pace Bend Park has a sign saying “Danger: Cliff Jumping Is Not Advised.  Hazards in Water.  Jump at Own Risk.”   Sage advice since the river has carved high cliffs and the water level in Lake Travis is down 30 feet due to the drought of the last two years.

Pedernales Falls State Park:  Another sign of the drought is the modest flow of water over these falls on the Pedernales River.  But as a cautionary tale the park office has a picture of the falls during a flash flood.  The entire rock face of the falls is a raging rapids.  To get a sense of the scale of the falls, look at the black spot visible through the bush in the right foreground.  That is a person walking on the rock face of the falls.  My traveling companion, Michele, just takes snapshots with her I-phone but she proved to be an excellent spotter.  She was the one who saw a dung beetle rolling its prize across the path leading to the falls.  The park also has two bird blinds with food and water sources to attract birds.  We saw quite a few birds there.  But it was already midday by the time we got to that part of the park and there was little cloud cover.  So the light was pretty harsh for good photography.

Old Tunnel State Park:  This park takes its name from an abandoned railroad tunnel.  The tunnel is now home to three millions bats.  From May to October the park stays open late so visitors can see the bats emerge at dusk.   Unfortunately, we were there in April so the park closed at 5 PM so I was not able to get any bat pictures.  If I go back to the Hill Country again I would definitely try to go when the park remains open for bat viewing.

Cave without a Name:  There are a number of caverns carved into the limestone of the Hill Country.  The owner of this particular cave held a contest in 1940 to name the cave.  The $250 prize went to a young boy who said the cave “was too beautiful to have a name”.   The cavern was certainly beautiful, and seemed less commercialized than some of the others.   We went in the middle of the week and the tour “group” was just the two of us.   That made it a lot easier for me to stop to take pictures.  Photography in a cave was challenging, especially since I had no tripod with me and only the flash built into the camera.

Enchanted Rock State Park:  Enchanted Rock is a batholith, an underground rock formation uncovered by erosion.  Near the base there is enough water to create small streams like the one in my photo.  Enchanted Rock rises more than four hundred feet from its base, which makes for a steep climb even on the more sloped side that I captured on my way up.  From the top there is a commanding view of the surrounding hills.  And a few depressions in the rock capture enough soil and moisture to support little oases of plants.

Please submit any questions you would like to ask the Photographer: