March 12, 2012 – It was another exciting meeting this night with 50+ members and guests coming to listen to Susan and Mark from the Ball Horticultural Company.

Greg Blue, El Presidente, started out the meeting with a brief business update. We have now eclipsed 100 members. Woohoo! Tina Dunne has accepted the Fundraising Chair for MAPS and will need everyone’s assistance to keep our group growing. Over 100 pieces of art will be shown at the exhibit later this month. Thursday, the 22nd, is drop-off day leading up to exhibit on the 24th & 25th. All those showing are encouraged to sign up for a 2.5 hour time slot to work the show. Don’t forget to bring your $20 in either art donations or cash entrance fee when dropping off your exhibit artwork.

Susan Schmitz, Ball’s Trial and Education Manager, was introduced and presented a 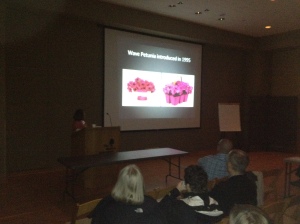 succinct history of Ball Horticultural Company. George J Ball began his career by working with and for a wide variety of fresh-cut flower growers during the late 19th century. The Spanish-American War and Phillipino War was a time of adventure and drew George to the travel. In fact he began writing down his adventures by describing the local flora. This grew into “Growers Talk,” a pamphlet describing his thoughts and experiences with gardening.

In 1905 George found his way to the Chicagoland area and launched Ball Company. Starting in Glen Ellyn and expanding to West Chicago Ball sprang up with large greenhouses to sell cut flowers.

The remainder of the Ball historical story is one of growth (pun completely intended). Making sure that their customers all the way from the commercial grower to the home gardener are first and foremost Ball works with everyone to get the best results.

Currently Ball has a worldwide presence from it’s worldwide headquarters to China to South America bringing to the home gardeners the best colorful flowers. Petunias, begonias and all the like are Ball’s signature flowers.

Mark Widhalm, Ball’s Corporate Photographer, was then introduced and discussed his lifelong interest in photography. Starting out with a semi-manual Pentax K-1000 Mark honed his craft over many years.

The Field Museum was his second gig – second shooter and all-around assistant. Mark’s willingness to shoot all that he could allowed him to expand his art.

Once Mark reached Ball his experience as a corporate photographer allowed him to showcase the flowers and gardens throughout the world with the beat possible light. Producing photographs for catalogs, magazines, and brochures Mark shows his talent to capture the various bloom shots of all that Ball has to offer. Looking into the light provides depth to the photo and enhances the appearance of the flowers.

Minimal, critical equipment allows Mark to work quickly in the field. A small reflector, a long macro and a long standard lens are all that he takes into the field to capture just that perfect shot – even if he has to “do some gardening.” All the compositional techniques are used to build interest in the plants. Unconventional techniques are also used to provide a different look to standard horticultural photos.